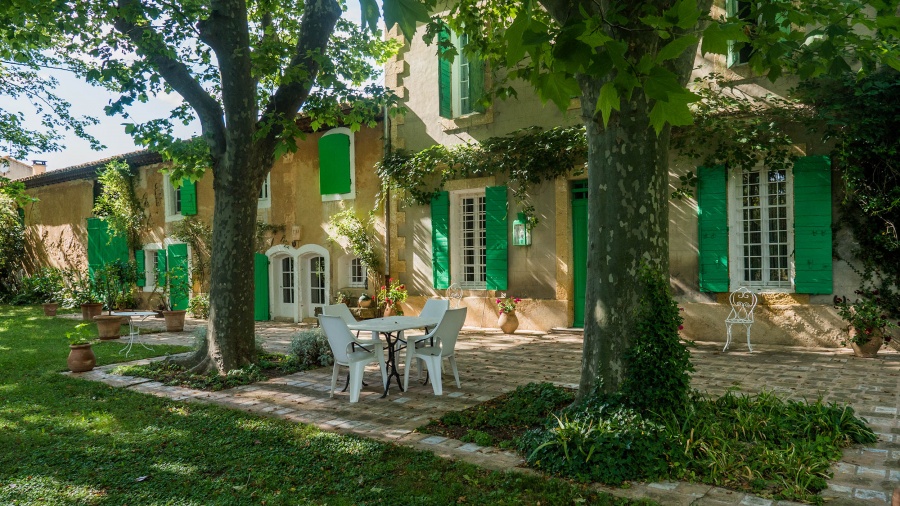 At the end of the First World War, Philippe Pignol, poet’s maternal grandfather lived at Le Bayle Vert where he died in 1921.

Already mentioned in the Cassini’s map, Le Bayle Vert is a 18th and 19th centuries mas de Crau, in the state known by the poet (home, garden, meadows and surrounding landscape).
During the poet’s life, Le Bayle Vert was a meeting place for his friends painters, writers, photographers… There, he wrote all of his poetry, theatre and literature, edited a collection of artists’ books (Les Livres du Bayle Vert), created a typeface (Le Touloubre) and an iconographic work (etchings, drawings, tapestries …).

Since March 1996, Le Bayle Vert is a place of memory, included in the inventory of Monuments Historiques and Maison des Illustres since fall 2014.

The Centre Mas-Felipe Delavouët, member of the Fédération nationale des Maisons d’écrivain et des Patrimoines Littéraires, is established at Le Bayle Vert since its creation in 2003 ;
18th century’s stables  are to become residence’s house for researchers and artists with an exhibition hall.

Le Bayle Vert is opened to the public by appointment only and from 10 am to 12 pm and 14 am to 18 pm during the exhibitions.

The old stables (the end of work waiting for additionnal funding)